Windles and The Croxley Press celebrate the Wayzgoose tradition 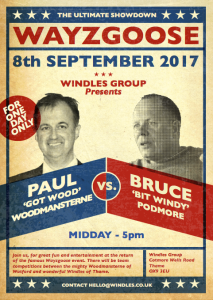 It should never be said that those in the greeting card industry let competition get in the way of having fun. Greeting card printers, Croxley Press (part of Woodmansterne) and Thame-based Windles will battle it out in a Waygooze event.

They may both be state of the art printers, but on Friday 8 September both businesses will be fully embracing the past, with their own spin on a Waygooze event, which is based on an ancient tradition that was staged to mark the transition from printing by daylight to printing by candlelight. The master printer would throw a ‘great feast’ for his staff, usually involving an excursion into the countryside, with much merrymaking.

The festival had all been forgotten by the latter twentieth century, but when Seth Woodmansterne. Who heads up The Croxley Press learned all about this ancient feast, he thought it about time to resurrect the tradition.

“With Watford once the world-renowned centre of commercial printing, coupled with the UK being the fifth largest producer of printing materials, Woodmansterne and Windles Group have teamed together to bring back the Wayzgoose,” commented Seth.

As Michelle Mills, marketing manager of Windles added: “It’s a great opportunity to celebrate our amazing industry, thank our teams for their hard work during the busy Summer, and bring back some good old British tradition.”

This extravaganza pushes forward of the traditional Wayzgoose events, which was usually held around Bartholomew-tide. The Day of St Bartholomew falls on 24 August, St Bartholomew being the patron saint of leather tanners/book-binders. It is believed that Gutenberg’s first printed bible was finished on this ‘august’ day in 1456.

This modern day Wayzgoose event, which will take place at Windles Group’s premises (on Sept 8) will involve an afternoon of competitive sports, with both printers’ teams battling it out in good humour. There will be food, drinks and a band performing until ‘candle lighting time’!

* The Wayzgoose event follows hot on the heels of a far messier event, which saw the Windles’ Group Gloopies Girls participate in the Cancer UK ‘Mud Run’ in Bedford. The plucky mucky Windles team raised over £1,100 for Cancer UK last month.

Products Of Change partners with Autumn Fair’s Power Of One

Anita bubbles over at win

Products Of Change partners with Autumn Fair’s Power Of One
on August 9, 2022
Trade show drive for sustainability education and practice guides...

Whoops of joy from The Henries’ finalists
on August 5, 2022
The good news from jubilant publishers travels fast...
Get the latest news sent to your inbox
Subscribe to our daily newsletter