The Retas finalists whoop with joy

“What a miserable morning, but oh how the mood can change when you find out you have made the finals of The Retas awards 2018 – WHOOP WHOOP!” was the immediate reaction of Liz Stevenson, Jo Parker and Sue Perry of retailer You, Stamford learning the news on Tuesday (May 1) that the shop is one of the finalists in The Retas 2018 greeting card retailer awards. “We are absolutely thrilled and super excited for the big event. It’s our 20 year anniversary next year as an independent retailer so we are thrilled for the recognition and nomination,” Liz added.

But the ‘whoops of joy’ were audible up and down the length and breadth of the UK as retailers in all of The Retas categories discovered they too had made the prestigious shortlist – and social media channels were buzzing with the news.

Now in their 14th year, The Retas awards (organised by Progressive Greetings) are the dedicated annual awards that recognise and reward UK greeting card retailers’ right across the spectrum for their activities in the last year.

“The Retas are now universally acknowledged as being true accolades of excellence,” says Warren Lomax co-owner of PG and The Retas. “We know retailers are genuinely excited at making the shortlist, and so they should be – we had hundreds and hundreds of nominations this year, so all retailers who have made it into the finals have every right to feel be extremely proud about being one of the best greeting card retailers in the UK.”

Here is just a taster of the feedback from happy Retas finalists:

“It goes without saying I’m completely made up about being a finalist,” said Kristan Madigan-Miller, owner of Cadeaux & Co, Wells & Chipping Sodbury. “I have no idea who nominated us, so I’ll be thanking every agent and card company I know! I’m very much looking forward to the ceremony – I am NOT missing it!”

Rod Saunders, co-owner of Card Shack in Broadstairs said he “over the moon” by the news that his shop is in the finals. “After spending 25 years in the greeting card industry as a sales rep, including 15 years at Paperlink, I took early retirement and opened Card Shack four years ago. My wife and myself feel really proud of such a small shop in a small seaside town can be recognised for such a prestigious award.” Rod paid tribute to Trevor Gibbons of Maythers and Miles Robinson of House of Cards from whom he says he learnt his buying skills from!

“Wow, this is great news – we’re doing a little happy dance,” exclaimed Julia Keeling, owner of Wishes of Cudworth. “This means so much to us. We’ll be sure to contact the local press especially as we’re launching the Cudworth Bunny Trail’s second year soon, so this will make for a perfect leading story.”

Beverley Heyworth, owner of Blue Rose Gifts & Balloons in Heywood said of her nomination in the Best Greeting Card Retailer Iniative: “We are so excited to be nominated again this year. This nomination, while for the shops contribution to the 1940s day, is a testament to Heywood’s community spirit of which we are proud to play an integral part.  We a looking forward to PG Live for our 2nd year and going to London for the awards ceremony which was lots of fun last year.”

Happy finalists also took to Twitter to express their delight: 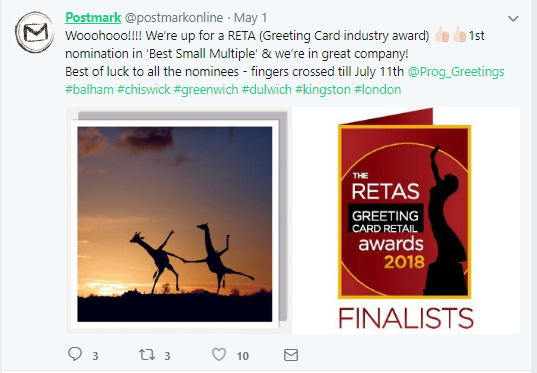 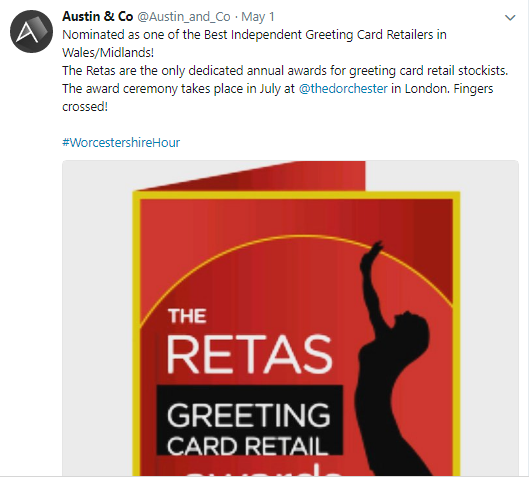 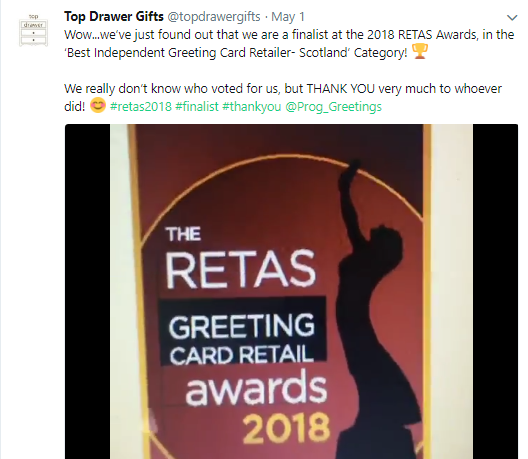 Henries are ready to rock!

Thinking put into action for TOYW

Moonpig teams up with Heinz

Hallmark grafts a Woodland Trust partnership
on September 27, 2022
Publisher to make a 20p donation from every online order to the environmental charity...

Thinking put into action for TOYW
on September 23, 2022
Schools, publishers, retailers and designers show full engagement...
Get the latest news sent to your inbox
Subscribe to our daily newsletter