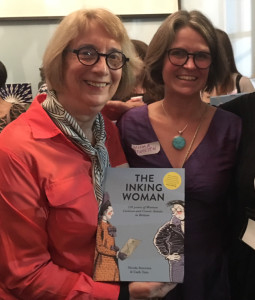 Cath Tate, a mainstay of the humorous card publishing scene has notched up many great achievements to her name – and next Wednesday (28 March), she adds another one – appearing on BBC Radio 4’s Women’s Hour, which has almost 4 million avid listeners.

Cath, the namesake of the eponymous card company she runs with her daughter Rosie, will be interviewed by Woman Hour’s legendary presenter Jenni Murray about a new book, entitled The Inking Woman, which celebrates 250 years of women cartoonists and comic artists, featuring many of the women Cath has published on cards and postcards over the years.

Cath co-wrote the book with illustrator and graphic artist, Nicola Streeten, who will also be appearing on the 10am radio programme,.

The book is a follow on from an exhibition of the same name that was held at The Cartoon Museum in London last year.

The ever laidback Cath says that the exhibition and book have been a long time coming.

“I started publishing postcards using work by women cartoonists in the 1980s and realised how many really good cartoonists were around that were virtually unknown. I wanted then to have an exhibition to show people how much talent there was then and finally, some 25 years later, we made it happen!” Cath summed up.

The Inking Woman book is published on 29 March by Myriad costing £19.99.

Cath Tate is now full steam ahead on her next challenge, to ready new card ranges in time for their launch at PG Live in June (June 5 and 6).

The imminent Women’s Hour coverage comes during a rich seam of consumer publicity for the greeting card scene – including major Mother’s Day features on the BBC Radio 2 Simon Mayo DriveTime, on BBC Radio Scotland, as well as substantial coverage in the Sunday Times, Daily Mail, Mirror and Sun about the broadening of the card captions for the second Spring Season.

The Peaky Blinders From Danilo Triumph At The Licensing Awards

Black History Month Is Firmly On The Cards At Sainsbury’s

Thinking of You Week ‘The Movie’ Premieres Today

Pukka Advice From Holly Tucker: “Do What You Love And Love What You Do”

The Ladies of Loxleys Mucked In For Charity
on September 17, 2021
Female employees of Sheffield card printer are in the running to support colleagues...

The Peaky Blinders From Danilo Triumph At The Licensing Awards
on September 17, 2021
Hallmark, UKG, Moonpig, Emotional Rescue, Pyramid, Card Factory, Amscan and Paper Salad are at the mega celebration...

Black History Month Is Firmly On The Cards At Sainsbury’s
on September 17, 2021
GCA x Sainsbury’s design competition winners ready to go into store...

Top Drawer Opens Tomorrow!
on September 11, 2021
Full RetailFest seminar programme and launches galore...
Get the latest news sent to your inbox
Subscribe to our daily newsletter