A shade of teal is announced as the world’s favourite colour after an extensive survey of people around the world by paper company G. F Smith 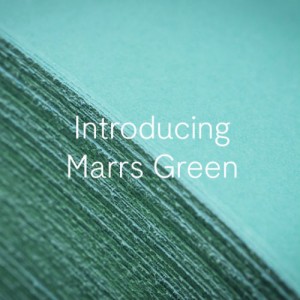 The world’s favourite colour has been announced as ‘Marrs Green’ by paper company G. F Smith (that supplies many card companies). The global quest forms part of G. F Smith’s involvement in the Hull UK City of Culture 2017 celebrations and was announced in a ceremony in Hull last Thursday (29 June) by dropping coloured pieces of paper onto the waiting crowd (pictured at top).

Hull-based G. F Smith started the search for the world’s favourite colour earlier this year, asking thousands of people (including many from the UK greeting card industry) from over 100 countries worldwide to pick their favourite colour using a dedicated website. The winning colour – a shade of teal – was picked by Annie Marrs of Dundee and will be named after her. She will be invited to see the colour being made into a beautiful bespoke paper at the mill in the Lake District and introduced to the iconic Colorplan range from the G . F Smith paper collection.

John Haslam, G . F Smith’s managing director commented: “Close your eyes and imagine a colour that makes you feel happy and contented, empowered and invigorated, creative and dynamic. I emphatically believe this is what Colorplan Marrs Green delivers. When Annie Marrs selected her favourite colour I’m sure her mood was similar to mine as I look and feel her Colorplan Marrs Green. I absolutely believe this colour will prove to be not only the world’s favourite colour but the world’s most beautiful colour.”

As well as the world’s favourite colour initiative, G. F Smith has also worked with eight leading creatives to create ‘Paper City‘, a series of beautiful, surprising and colourful temporary installations across a range of sites in Hull city centre, made from G. F Smith’s Colorplan range of paper. Paper City runs until 9 July with the aim of challenging people’s perceptions of Hull and offering different ways to experience the city.

All aboard for Festive Friday

Jon’s slugs and mugs have legs!

All aboard for Festive Friday
on December 2, 2022
UK Greetings gets in spirit with social media, mince pies, and helping local causes...

Paper Tiger roars on TV
on December 2, 2022
Edinburgh store gets up close and personal with This Morning’s Holly and Phil...

Sun rises for Danilo
on December 2, 2022
Publisher set for solar efficiency thanks to renewable energy scheme...

GOTY entries deadline extended
on December 2, 2022
Closing date for Gift Of The Year comp now 15 December – with live judging at Spring Fair...
Get the latest news sent to your inbox
Subscribe to our daily newsletter