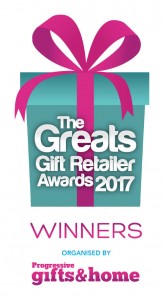 Some 400 guests – to include the cream of gift retail, leading gift suppliers and trade show organisers – made a beeline for the glamorous Grosvenor House on London’s Park Lane this afternoon (May 4) to see the winners crowned at The Greats Awards 2017, organised by leading giftware trade magazine Progressive Gifts & Home (the sister magazine to Progressive Greetings).

Taking crystal as its theme to celebrate the Awards’ 15th anniversary, it was certainly a glittering, glitzy occasion, with everyone enjoying a magnificent lunch, created by the chefs at the Grosvenor House, stand up comedy from actor and comedian Charlie Baker, and music from jazz trio Midnight Blue.

Sue Marks, editor of Progressive Gifts & Home, commented: “Despite the many curve balls that retail throws at independents and multiples year after year, the best continue to rise to the challenge and it is these ‘greatest of the great’ gift retailers that we were delighted to recognise and reward this afternoon.”

PG Buzz is delighted to reveal that the 2017 Greats Awards winners were:

Independent Gift Retailer of the Year – North and Northern Ireland
The Shop at The Emporium, Clitheroe

The photos of the The Greats awards will be uploaded to the official website by Monday 8 May  www.thegreatsawards.co.uk

Papyrus, The US Leading Specialist Card Retailer Closes All Stores

Christmas Reports From Barkers, Bentleys/Maddison and Love It

Scribbler Opens Its Largest Store Ever, In Leeds City Centre

Scribbler Opens Its Largest Store Ever, In Leeds City Centre
on January 23, 2020
Scribbler reverts to its original scripted logo for the new flagship ...

Clintons Remains True To Suppliers, Full Engagement With Landlords On Rent Negotiation
on January 21, 2020
Eddie Shepherd, Clinton’s ceo says the intention is “to keep the vast majority of stores”...
Get the latest news sent to your inbox
Subscribe to our daily newsletter