Card Factory has come up with a big idea, literally, as a way to thank all NHS workers for everything they are doing during these challenging times.

As a wholly charity-driven initiative, the UK’s largest greeting card retailer is to create the world’s largest Thank You card and is inviting everybody to sign it and make a donation of £5 to NHS Charities Together, the national organisation that brings together and promotes the work of more than 140 NHS charities across the UK.

Card Factory is to donate the full 100% of the monies raised from The World’s Biggest Thank You Card Campaign to NHS Charities Together. 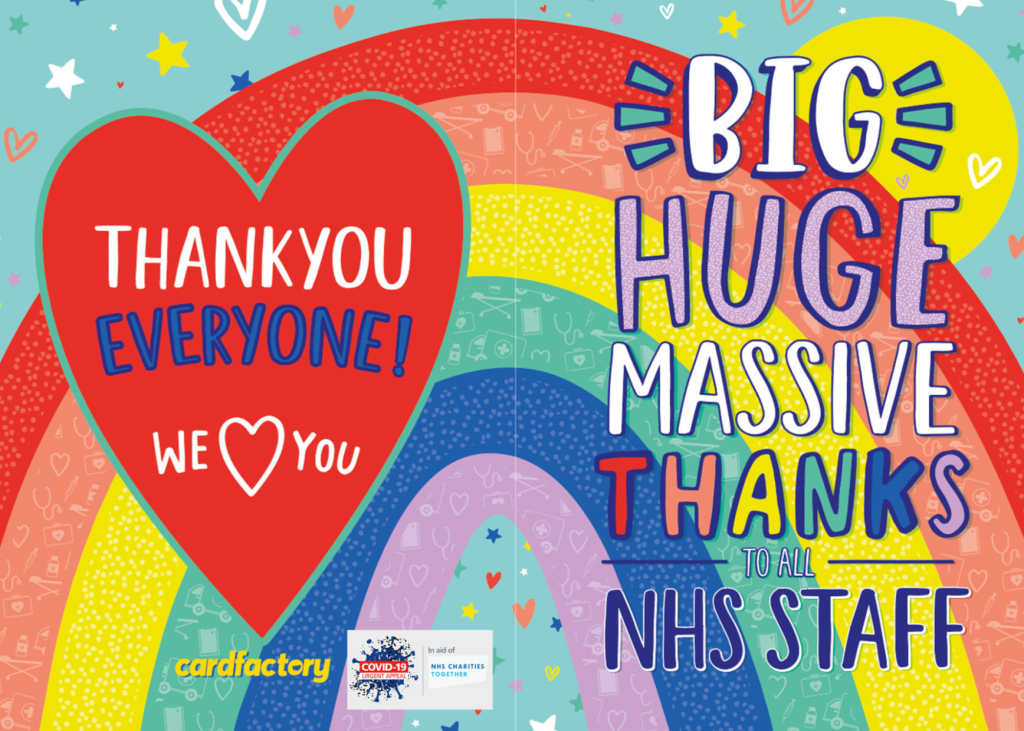 Above: Card Factory’s charity campaign will see 100% of donations given to the registered charity, NHS Charities Together.

Card Factory’s in-house manufacturing team in Yorkshire is well underway on making the enormous card that will be more than 18 metres in height – taller than three giraffes standing on each other’s heads!

“From nurses to night porters, from Nunhead to Nyetimber, the generosity of those who look out for us and look after us has been unparalleled in the face of catastrophe,” says Karen Hubbard, ceo of Card Factory who invites all those in the card trade and beyond to add their name to this gigantic card and make a small donation to the charitable cause. “We would love everybody in the UK to join us in giving everyone in our NHS, in recognition of their incredible efforts, The World’s Biggest Thank You.”

The hope is that not only will the campaign see a huge sum being raised for charity the hopes are that the card will also break the world record for the world’s biggest greeting card.

The Henries Awards 2020 Will Go Ahead, But Digitally For This Year

Royal Mail, Sainsbury’s Instagram Campaign, Radio Interviews And Indie Action For TOYW
on September 25, 2020
This year’s Thinking of You Week really is one to remember, and it’s not over yet ...

The Little Dog Laughed Has A Laugh With Its ‘Show Business’ Film
on September 25, 2020
Card and gift company’s video picks up on the fun of the fair for its catalogue launch...

Emotional Rescue To Be Distributed To Indies By The Nigel Quiney/Paper Rose Sales Team
on September 25, 2020
From December 1, some 220 Emotional Rescue designs will be available to independent retailers via Paper Design Group as it takes over from Carte Blanche as distributor...

The Henries Awards 2020 Will Go Ahead, But Digitally For This Year
on September 25, 2020
Global greeting card community will be brought together for a virtual evening event on Thursday 10 December...

Global Perspective: John and Bindi Simson of Simson Cards, Melbourne
on September 25, 2020
While ‘non-essential’ retailers in Victoria are likely to remain closed until Oct, Australia, card sending is remaining strong ...

Greeting Card Creators Feature In The License This! Finalists’ Line-up
on September 22, 2020
Tracey Colliston and Siobhan Harrison are among the six finalists in the Festival of Licensing competition ...
Get the latest news sent to your inbox
Subscribe to our daily newsletter